Give Me the Simple Life

As a kid growing up in the 60s, in a house filled with music and two parents who loved to sing out loud, I learned as a youngster to love the greats: Frank Sinatra, Dean Martin, Nat King Cole, the Mills Brothers, Rosemary Clooney, Boots Randolph, most of the Big Bands, and of course, Doris Day.

When Day sang her signature lyric, Que Sera, Sera, in the late 50s, she may not have known it then, but she was setting the tone for generations to come.

Que Sera, Sera, Whatever will be, will be.

The future’s not ours to see,

Que sera, sera, What will be, will be.

Truer words have never been spoken.  Or have they?  The Rat Pack’s Frank Sinatra told us That’s life, and a few years later Paul McCartney lyrically advised us to Let it be.  The same message in different tunes tells us life is going to do what it’s going to do, and we’d better learn to roll with the punches.  Or, as country star Jo Dee Messina suggests, You gotta bend when the wind blows.

Plain, simple advice that translated into today’s language means, It is what it is.

If that’s the case, then I’ve gotta be me  — thanks to Sammy Davis Jr. for that directive.  Which means that a sense of humor — and a large tumbler of wine — will go a long way toward getting me through the rough days in my currently upended life.

Unemployment, depleted retirement accounts, foreclosures and the like don’t scare me anymore.  They depress me, sure, but they don’t scare me.  What scares me is not having wine in the house and no gas in the car to go get some wine.  It appears that on a limited income I can’t afford gassing up the car and me on the same day.

Which is unfortunate because if I’ve discovered one simple thing through this reinvention it is that the more wine I have in the evening, the less I care about what kind of day I’ve had.  And as long as I have a chicken in the oven and wine in the fridge, I know I’ll be OK.  Hell, I’m more than OK — I’ve got riches beyond compare.

“I wonder what the poor people are doing.” my dad would often say at our modest, middle-class dinner table when I was a kid, casting a glance and a wink at my mom.  It was a signal of thanks for another great meal; a frequent, loving sentiment that said, “Wow, look how lucky we are.”

And he offered the compliment even when it was just our typical end-of-the-month meal of franks and beans.

These days, my thrifty end-of-month meal is a redo of leftovers on toasted bread — a quick and filling meal whose real appeal lies in its flexibility.  In an article I recently wrote for The Daily Muse, I described the clever crostini as a blank canvas whose options are endless.  Not only are crostini the perfect party food, but the finished product will make even the painfully novice host look like a rock-star chef.

Take a long look inside your refrigerator and pantry.  If it would be good on a sandwich, in a salad, or over pasta, it would be great on crostini — a small toasted slice of bread, usually French or Italian.  It’s fast, easy, and pretty enough for company.  Top your crostini with anything from sliced flank steak and melting blue cheese to olive tapenade or fresh chopped summer tomatoes drizzled with good olive oil.

When life drops you at the desperate point between slim pickens for dinner and next week’s paycheck, grab a baguette and take another long look in your fridge and pantry.  A little creativity in the kitchen will have you living the good, simple life in no time.

Hmm.  I wonder what the poor people are doing. 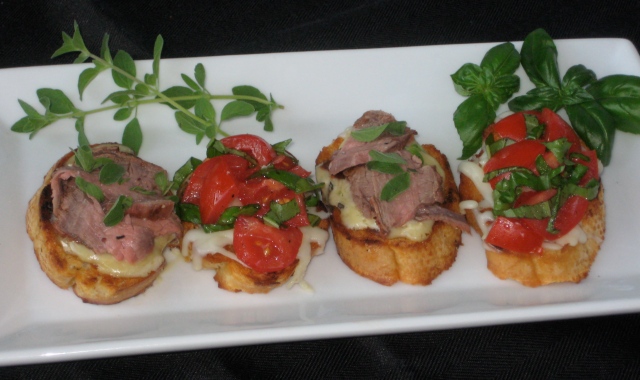 Slice your favorite baguette into 1/2 inch-thick slices.  Brush lightly with olive oil and grill or bake until golden in color.  Top with whatever your heart and stomach desire.  Some versions are perfect just topped; others can be topped and then broiled or heated to melt cheese or reheat ingredients.  Here are a few ideas to get you started.

I am a writer & editor, photographer, foodie, dog rescuer – the priority order changes daily. Most people think my dad was the funny one in the family. I'm here to tell you Mom had her moments. As a kid, whenever I asked her what we were having for dinner she'd turn toward me, glance down at the ever-present dish rag in her hand, and say with a smirk, “Stewed rags and buttermilk.”
View all posts by Patti, Reinvented →
This entry was posted in Brunch Favorites, Cocktails / Appetizers, Meatless Meals and tagged baguette, crostini, Dean Martin, dinner, Doris Day, Frank Sinatra, French, Italian, Jo Dee Messina, leftovers, Nat King Cole, pantry, Paul McCartney, Rat Pack, refrigerator, Rosemary Clooney, Sammy Davis Jr., Swiss, the Big Bands, The Daily Muse, toppings. Bookmark the permalink.

5 Responses to Give Me the Simple Life